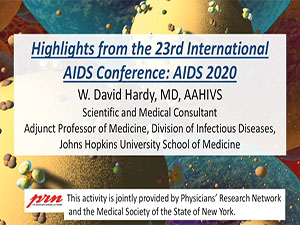 COPYRIGHT: Videos of live meetings of PRN in NYC are owned and published by Physicians' Research Network, Inc. Copyright © 2020. All rights reserved.
COLLABORATION STATEMENT: The AIDS Institute is proud of the ongoing collaboration between the Clinical Education Initiative (CEI) and Physicians Research Network (PRN). Founded in 1990, PRN has a well-established reputation for spotlighting the work of the most innovative and influential leaders in the HIV treatment, prevention and research fields through its monthly meetings in New York City. Since 2010, CEI has featured recordings of PRN's monthly events through the CEI website. The combined efforts of both educational institutions have enhanced the continuing educational resources available to New York State clinicians caring for people living with, or at risk for HIV.
Original Release Date: 8/19/2020
Termination Date: 08/18/2023
Review Date: 3/22/2021
Presenter
Presenter Bio

W. David Hardy, MD, is a scientific and medical consultant focusing on developing novel vaccine and cure/remission strategies for human viral diseases. He serves as Adjunct Clinical Professor of Medicine at the Keck School of Medicine of USC. He served as Senior Director of Research at Whitman-Walker Health (Washington, DC) overseeing NIH-funded ACTG trials and HIV Cohort studies and industry-sponsored trials from 2015-2018. While there he held an academic appointment as Adjunct Professor of Medicine at Johns Hopkins University School of Medicine, Baltimore, Maryland. From 2002 to 2013 he served as Director, Division of Infectious Diseases at Cedars-Sinai Medical Center and Professor of Medicine at the David Geffen School of Medicine at UCLA. Dr. Hardy also served as chief medical officer for Calimmune (2013-2015), a small California-based biotechnology company, funded by the California Institute for Regenerative Medicine (CIRM), using gene-modified CD4+ T cells and hematopoietic stem cells as a potential cure for HIV infection.

He received his medical degree from Baylor College of Medicine, Houston, TX and completed his residency in internal medicine at Harbor-UCLA Medical Center in Torrance, California. Early in the AIDS epidemic, he completed a clinical fellowship in infectious diseases/immunology and clinical research at the UCLA School of Medicine under the direction of Dr. Michael Gottlieb, the physician who recognized and reported the first cases of AIDS. He also completed a laboratory fellowship in molecular retrovirology with Irvin Chen, PhD at the David Geffen School of Medicine at UCLA focusing on development of retroviral vector delivery of gene therapy and vaccine applications.

Dr. Hardy has cared for persons with HIV infection since 1982 and conducted research on HIV and related diseases since 1984. His research has focused on treatment and prevention of opportunistic infections, antiretroviral therapy, immunotherapies, hepatitis treatments as well as retroviral vector research, cellular and gene therapy as strategies for cure of HIV infection. Dr Hardy served as Chair of the Board of Directors of the HIV Medicine Association (HIVMA) 2018-2019. Currently, he serves as Chair of the Education Committee and member of the Executive Committee of the American Academy of HIV Medicine (AAHIVM). He has served as editor-in-chief of AAHIVM’s comprehensive clinical textbook, Fundamentals of HIV Medicine for the HIV Specialist published in 2007, 2008, 2012, 2017, 2019 and 2021. He has volunteered with several community-based organizations, including AIDS Research Alliance, the Alliance for Housing and Healing, Being Alive-Empowering People with HIV/AIDS, Project Angel Food, AIDS Project-Los Angeles and the Foundation for the AIDS Monument.

The target audience is all physicians, NPs and PAs involved or interested in HIV education.

This online video and post-activity evaluation are one hour in length.

This activity has been planned and implemented in accordance with the accreditation requirements and policies of the Accreditation Council for Continuing Medical Education (ACCME) through the joint providership of the Medical Society of the State of New York (MSSNY) and the Physicians’ Research Network (PRN). MSSNY is accredited by the ACCME to provide continuing medical education for physicians.

The Medical Society of the State of New York designates this enduring material for a maximum of 1.0 AMA PRA Category 1 Credit™. Physicians should claim only the credit commensurate with extent of their participation in the activity.

Policies and standards of MSSNY require that speakers and planners for CME activities disclose any relevant financial relationships they may have with commercial interests whose products, devices or services may be discussed in the content of a CME activity.

This meeting of the Physicians’ Research Network (PRN) and enduring material were funded in part by educational grants from: Gilead Sciences, Janssen Therapeutics (a division of Janssen Products, LP), Merck & Co., and ViiV Healthcare.